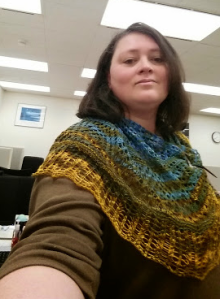 Well – good news: I have not fallen off the face of the Earth. I’m still around – just busy as can be and trying to be as focused as possible.

Succeeding at any of it? Not so much.

This is a pretty depressing journal entry. I do feel like I’ve lost myself (and my mind) a wee bit and I just need to get some crap down on virtual paper.

I just recently have been able to knit some. At the end of the day it just seems that finding time to do the fiber thing just .. its just gone. Its strange how when you stop doing something so simple, one can really lose sight of themselves – lose the grounding they have to what makes them who they are.

Work has been absolutely insane. Finding time to do anything is hard in itself – the little things like eating and going to the bathroom are nothing more than moments spent in a hallway attempting to get back to a desk or a meeting room. I enjoy my job … its finding time to do it that is getting insane. I find my time at work spins madly around me and I’m standing still in the middle of a storm – trying to catch a glimpse of sanity.

Then, on the flip side – I put pressure on myself to not only produce like a mad woman at work, when I get home I have to focus so much on my health. It’s almost like I’m too motivated now – as in I sit down and I have no idea which way to go. I have to get the weight down, gotta get the blood sugar down, gotta eat good, food prep, exercise, don’t forget to feed the kids, get meds, go to doctor appointments, try to remember to call in the new appointment for the nephrologist…. oh, and have I mentioned that I’m trying to manage my medications appropriately through weight loss. Yeah.. trying with what I know about but I’m sure that I need to have that nephrologist, at some point when I make the new appointment, take a gander at that too. My brain gets on overload.

And then – lets toss in the quick fact my son graduates high school this year. Yes – little DC (Doctor Coconut for those of you who are new to the blog – and by new I mean started following less than 8 years ago HA!). What does DC do? Wait… what does he not do? Look at colleges. He just doesn’t seem to care… and his lack of caring just eats at me. I want him to go at things gung ho (gee, I don’t know… like me?) but he doesn’t. He never has. I spend so much time worrying about him and his future while trying to not look like I’m worried about it in front of him that I am sure its giving me more grey hair than what is standard issue for the avefrage 40 year old.

And then.. not to complain because I think its awesome – but I was a finalist for my company’s Employee of the Month program. This isn’t your average, get-your-name-on-a-plaque award. This is serious shizz-nit (I have no idea how to spell that). In fact, outside of all the other awesome perks a trip to St. Martin was up for grabs. Yeah.. I said that. All expenses paid trip for 2 at no cost to vacation time at work either. It’s s-e-r–i-u-o-s.

So I spend the 2.5 days I know of my nomination worrying even more, trying to squeeze other things into my already crazy mind-life like hair cuts, nail appointments, and clothing shopping….. ya know, to not get it.

I let myself hope too much on that one. That sort of thing is not the thing that happens to me. I’m not even the gal that doesn’t get Bingo while her ball is showing on the monitor to be called next. I don’t get close to things like that.

To top it all off, I’ve had a helluvah pain in my left skull region (yes, whole region… its weird) for 3 days now. I don’t like it and its either a pulled muscle, stress related, gritting my teeth too hard, a freaky earache, or I am growing a grapefruit in my brain. I’m putting my money on muscle or stress. And gritted teeth. That’s definitely happening too.

With the skull/head pain, I have basically stopped moving. As the pain has escalated, I find if I sit perfectly still with my head on an elevated rest so I don’t actually have to hold it up, the pain is somewhat tolerable. I would totally win at a mannequin challenge. No one can do this better. So – with the new found need to not move, I feel like a lump. And what should lumps do – look at Facebook.

In the last 2 days I have found this thing: oyster shucking parties. If you haven’t heard of it (but I’m guessing you have), these hosts (usually hostesses) go on Facebook and open oysters. People buy them, they get to see their oysters opened during a “party” and then they can get the pearls mailed to them OR they can get them set into some jewelry piece and that’s mailed to them. It’s actually pretty fascinating. I am learning all the cool lingo like “it’s a dark,” “twins!,” “ooooo unicorn peachy pink,” and “look how nasty this oyster looks on the inside.” Ok, that last one I only hear inside my head. The hostess never points out that those things look like they are just about 2 shades from being a totally different scientific mass classification.*

So what is the moral of my story? As if I need one. HA!

Truly, its not that I have some urge to go out and sell oysters. I think its just the happiness and passions this lady I’ve been watching has. She has a smile, she’s helpful, she is truly enjoying her job and it looks pretty stress free. I mean – she opened up an oyster that had a crappy pearl. in it. What does she do? Apologizes to the customer (she only opens when the person is there), said she could do better, grabs a pearl from her back stash (or a new oyster) and boom – problem solved. Sure she has to deal with shipping stuff, but I’m guessing its not that stressful either if a good process is in place.

I wonder if she ever feels like the world is passing her by? It doesn’t look like it. And I question how in the world can I get to a place of that little stress (I’m sure she has some… its just not crazy… I don’t think. At least in my head, that’s what I pretend).

What can I do to make my life less stressful? How do I pull back from where I am and get to a better place? I am already on an anti-depressant but for some reason my life is hitting me hard right now. Money as its own topic is not good, but I seem to be working around that ok – it doesn’t seem like that’s the cause, although usually it is.

How do I recapture the passion for my job and check stress at the door? And do it in a normal amount of hours….

This.. was a brain dump for my own benefit. I really don’t expect anyone to read this. I’m just trying to reground myself to what I know I want while appreciating what I have.

*The hostess I migrated to watching really needs to keep her hands off of her face. In the last party I watched she was touching her face a lot (and I mean like .. a LOT .. which is her normal) and she got something in her eye. And then she says something like she doesn’t know what’s happening, her eye just started watering and I’m all like “HEY! YOU PUT OYSTER CRUD IN YOUR EYE BECAUSE YOU KEEP TOUCHING YOUR FACE” inside my head. She obviously did not hear me. She kept touching her face. She should stop doing that. I’m going to go Google oyster diseases transmitted through mucosal membrane contact. Germaphobe.

Posted by Cris on February 22, 2017 in Not Fiber Related, Rambles and Reflections