I am a terrible liar… and even worse recoverer

This post is completely not fiber related and even more so completely described by the title of this post.

A long while back a co-worker and friend shared a story about a small painting on his desk. His daughter (I do not know how old she was at the time, but she is currently 16) had painted it. Apparently, she put it in an art fair and was excited, at the end, to be told it sold. She did not know who the buyer was. Regardless – she was very excited to have sold a piece of art. My friend was the mystery buyer. I think it is a fantastic telling of what kind of parent he truly is.

Can you see where this is going?

Yesterday, my friend sent me a message his daughter was at work with him. I said I would stop by to meet her. And I did.

He was not there (she said he had stepped away but would be right back) so I just started chatting with her. I have teenagers so I know how to converse… but I made the mistake of asking if she was the child who painted… and she was confused and that is when my mouth just did not stop. I said something rambley about a painting I had seen, the color purple was mentioned… and then I totally remembered that I was not to tell her and tried to back out of it by saying that maybe I was thinking of someone else and it just got really ugly from there. It’s all a blur at this point.

I sent him a message (so she would not see it) and apologized and said I was so so sorry…. I messed up and I only hope he is forgiving of my complete lack of “shut-up-ness” that I should have had but I didn’t.

I mean, I think its a great trait to not be able to say you are a “good liar” but recovery… sheesh – you’d think as a stealth knitter around the holidays that I would have at least harvested a wee bit of skill for recovery… but alas.

Posted by Crystal from Willowbrook Farms on May 29, 2015 in Not Fiber Related

Crafting for Loved Ones (or: thoughts on missing out on showing someone you love them)

I am a blog reader (which, if you have a blog you think I’d enjoy, comment with a link). I subscribe to several different types of blogs but of course, the majority are somehow related to fiber. One of those blogs is called Roving Crafters. A post showed up on May 26th that really got me to thinking…  END_OF_DOCUMENT_TOKEN_TO_BE_REPLACED

Posted by Crystal from Willowbrook Farms on May 28, 2015 in Rambles and Reflections

Tat Tat Tootsie, not Knit! (or: huh…. I thought I remembered how to do this… )

I have always worked with fiber – one of the favorite stories from kindergarten is how my mother got a call because I had taken a needle to school…. for my embroidery. And the conversation from that was my  mom reminding Mrs. Thompson (my teacher) about how she said she told the kids to bring in things to work on during their free time… and embroidery was one of those things I did. Needless (or should I say needle-less) to say, I was no longer permitted to bring needles to school. Crochet was acceptable – but no needles. END_OF_DOCUMENT_TOKEN_TO_BE_REPLACED

Posted by Crystal from Willowbrook Farms on May 26, 2015 in My Projects

Squirt woke up during my blog writing (I write ahead of time and schedule – its easiest for me) last Saturday and was laughing because I said that she was a pro at photobombing (in my post about my birthday). She wandered around a little and then laughed and said “I don’t always photobomb pictures… but when I do they are pictures of myself.”

I got a good laugh and asked her where she read that – and she said she made it up.

I couldn’t resist – I had to create a meme for it. It was too cute to not.

A quick photo shoot and a somewhat less quick trip into photoshop, and this was born.

She is pretty excited about it and cannot wait to see if it hits mainstream meme – I have no idea what will happen to it, but I still think its funny as heck.

Posted by Crystal from Willowbrook Farms on May 23, 2015 in Not Fiber Related

Another Birthday For Me 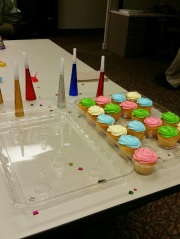 I got the call right after work… a call from my brother.

This is your birthday song.
It’s not very long.
hey.

Another birthday down – exciting stuff. Granted, its been a couple of weeks – I’m just not sure why I forgot to blog about it.

END_OF_DOCUMENT_TOKEN_TO_BE_REPLACED

Posted by Crystal from Willowbrook Farms on May 23, 2015 in Rambles and Reflections

Slow knitting (or: not quite as slow as I thought I was)

I identify myself as a slow knitter. It’s true – I can do so much more in a much less amount of time than I do with crochet than with knitting. I’m ok with that – knitting and crochet are different crafts… it is just what it is.

To tell this story, I have to take you back to around March 20th/22nd. Easter was quick on its way and I thought “wow, I should make each of the kids a pair of socks” … and then I looked at the calendar. I thought (honest truth) that Easter was later in the month. What I saw on the calendar was that Easter was actually April 5th.  END_OF_DOCUMENT_TOKEN_TO_BE_REPLACED

Posted by Crystal from Willowbrook Farms on May 6, 2015 in My Projects, Rambles and Reflections

Making Gifts for Men (or: What? I can’t make that for my brother!!!)

As my long-time readers know, my family has a Christmas tradition of drawing names and making a handcrafted present for that person. Sure – other gifts can be bought and you can buy for anyone you want – but by drawing the name you are committed to making at least one present for that person. The handmade gifts are exchanged on Christmas Eve, making them a wee bit more special – giving us our own time to oo and aw over them, letting them be the special gift they were meant to be. END_OF_DOCUMENT_TOKEN_TO_BE_REPLACED

Posted by Crystal from Willowbrook Farms on May 4, 2015 in Rambles and Reflections