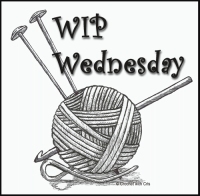 Truth be told, I have had a bit of project ADHD lately…. hopping from one project to the next, bookmarking pattern after pattern – no real direction but a lot of distraction from one yummy fiber to the next.

What I am hoping for is that if I post what I’m working on… all of it…. then perhaps it will shine a light on how crazy it is and help me grab a little focus in wrapping up these projects.

It may not seem like much to some, but for me and my schedule – its causing scatter brain!

Be warned that while the blog is “Crochet with Cris” – I do lots of things with fiber so I inappropriately  named the blog. Later on, I started with Creations by Cris, which is what the blog should have been.

END_OF_DOCUMENT_TOKEN_TO_BE_REPLACED

Posted by Crystal from Willowbrook Farms on August 20, 2014 in My Projects 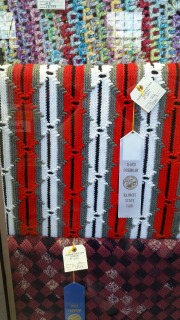 Oh happy day…. as promised, this post is going to be pretty image intense with several shots from the State Fair.

As you all know, I tend to assess my win against those that entered and the others that placed. I have to admit, the first place winner (pictured to the left also, under mine – the wine colored entrelac) was good – I was not a fan of the color BUT I will say that the gauge was spot on and even, nice and tight.

I did not like the second place winner. I hate to say that out loud, but its the truth. I do not think it should have paced at all. It was a basic ripple in double crochet. The gauge was not strong at all and the color choice made me wonder if a dart board was involved in the decision process.

This is an image of all three winners… you can see the pattern of the entrelac was rather random, but at least the colors matched. The second place winner, pictured next to mine …. it was just… strange. Very very strange. If the person who created that afghan is reading my blog, I will say that I wouldn’t turn it down as a gift – I’m sure its just as warm as any of the other blankets – but it just didn’t look better than some of the others. In fact, there was a white blanket (which somehow escaped my picture taking festivities) that I would have given 1st, the entrelac could then have had 2nd, and I would have been more than happy in third… again. Truly, the entrelac and mine were about even-stevens when it came to actual construction. 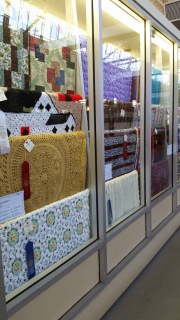 This is a shot down the whole…. the fourth case, cut off in the image, is where that really awesome white blanket was. But, as you can see, there were several entries in all the categories with 5-7 afghans/bed spreads in each display. A rather impressive showing.

In all honesty, there were very few amigarumi entries and even fewer pillows, shawls, socks, bibs, etc…. the baby blanket category had a good turnout but the real focus in the hobby building this year seemed to be quilted items.

Outside of the quilt-ghan looking afghan with the barn on it, I was surprised there were no graph-ghans presented.

I suppose I should also apologize for the shape of the pictures…. I took them with my phone (if that wasn’t obvious *laughs)

So that is pretty much it – I am going to leave you with some other images I took. Many were behind glass so it was hard to get a good photo, but I succeeded in some cases.

I hope you have a great day!

Posted by Crystal from Willowbrook Farms on August 20, 2014 in My Projects 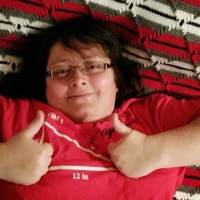 Thumbs Up to Third Place at this year’s State Fair!

The majority of folks give a grumble or some comment about certain individuals not knowing how to judge good work… I disagree. I understand they are trying to make me feel better about not placing higher, but in reality, I don’t need it. I’m excited to have won third.

I am THRILLED that at the STATE fair I placed third out of all the entries of “Crocheted Afghans – in one piece”.

I genuinely cannot wait to get out there and see who placed above me and the entries that may not have placed at all. I know it takes a lot of work to put everything together for an afghan, so place at all is really awesome.

I will be going out to the fair next week to take some photos so look for gratuitous fiber arts photos coming soon!

Posted by Crystal from Willowbrook Farms on August 8, 2014 in Announcements 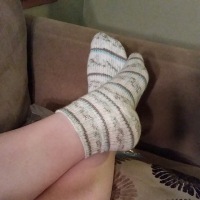 I have no idea what the title of this post has to do with the creation of socks, but its all I could come up with. *laughs*

I do know that I really enjoy making socks – and while I normally use two circular needles and sometimes occasionally one circular, nothing seems to make me feel more “in touch” with my “knitting heritage” like using bamboo double pointed needles.

Am I the only person that feels like this?

I genuinely have no idea why but I sometimes venture to think it is the appearance of a seemingly complicated technique down to the idea of my actually possessing some form of coordination in my fingers (because I definitely don’t have it in my feet – as my dancing surely proves). Perhaps its the imagery of pioneer women adventuring to the West, sitting high atop a covered wagon with their needles in hand (I doubt I’d be coordinated enough for this one). 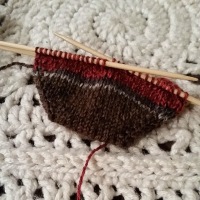 What is your favorite method of “going in a circle” while knitting – DPNs? Two Circs? One?

Posted by Crystal from Willowbrook Farms on August 8, 2014 in My Projects, Rambles and Reflections

I know I do not appear to update my blog very often and well, for the last however many months that would be a true statement, but I didn’t even think to let everyone know that I actually have been posting regularly in that time, just not specifically “here” – so the question is – where?

All those locations are linked on the right side of the blog.

So why am I bringing this up now?

Because I’m adding two more “where am I” locations – Instagram and Pivotal Tracker.

In all reality, I believe Instagram is the most updated of all these sites. It is just so easy to grab my phone and snap a photo to share. Throughout the entire time I was not posting here, I was posting to Instagram regularly. Granted, there you have to tolerate all sorts of photos; albeit the majority are fiber related.

Pivotal Tracker is a little different – it is really just a spot to track my work and my progress – to show what I’m working on and what I have finished and when. It’s a tool I use at work and find it completely applicable to what I do as far as my crafting. I will be using it to do my year of project (YOP) report outs for the blog.

Hope you have a great day!

Posted by Crystal from Willowbrook Farms on August 5, 2014 in Rambles and Reflections